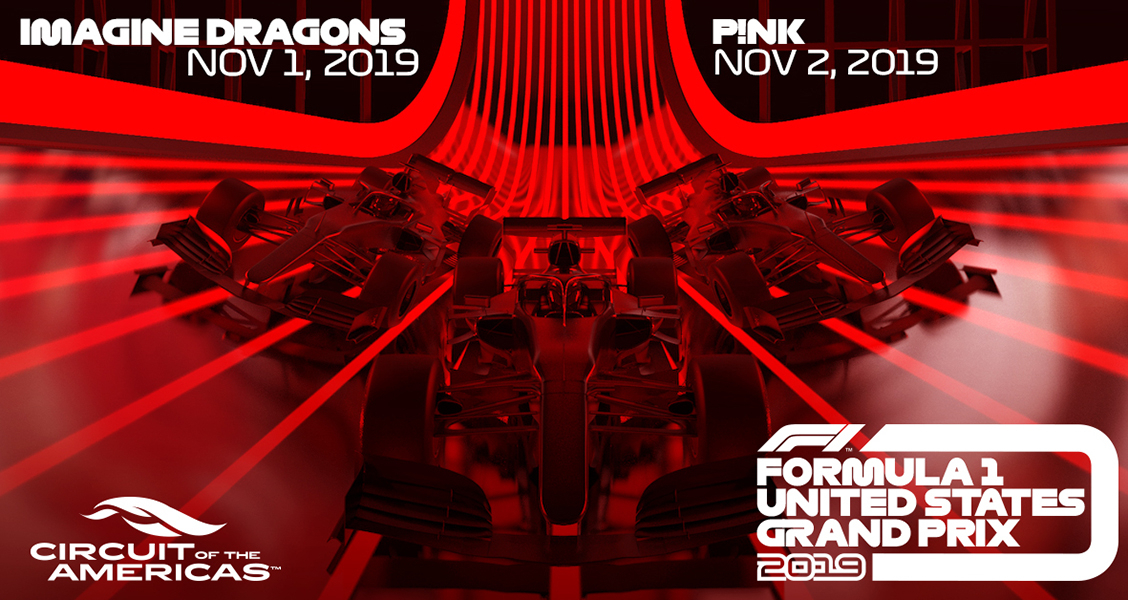 COTA announced today that they will welcome two world-renowned musical acts to the Super Stage at the 2019 FORMULA 1 UNITED STATES GRAND PRIX. On Saturday, November 2, GRAMMY® Award-winning and international pop icon P!NK, who is sure to ‘get the party started’ and give fans an unforgettable performance, will take the Super Stage at COTA. The night prior, Friday, November 1, GRAMMY® Award-winning band Imagine Dragons will start the weekend on a high note after the first day of qualifying races.

Tickets for the FORMULA 1 UNITED STATES GRAND PRIX, set for November 1-3, will go on sale Tuesday, April 23 at 10 AM through circuitoftheamericas.com.

Bobby Epstein, founder and chairman of COTA, commented on today’s announcement: “We’re thrilled to welcome P!NK and Imagine Dragons to the Super Stage for this year’s United States Grand Prix. COTA is proud to host such an exciting, non-stop weekend of entertainment, bringing together the best of racing, through Formula 1 USGP, and music in welcoming these internationally-renowned artists to the Live Music Capital of the World.”

Currently in the midst of her extended Beautiful Trauma World Tour, GRAMMY® Award-winning international pop icon P!NK brings her truly spectacular show to the Super Stage at COTA Saturday night of USGP weekend. P!NK, equally known for her powerhouse vocals, uplifting anthems, and showman stage skills, is sure to ‘get the party started’ and give fans an unforgettable performance. Since her debut in 2000, P!NK has released seven studio albums, one greatest hits album, sold over 50 million album equivalents, over 75 million singles, and over 2.4 million DVDs worldwide, and has had 15 singles in the top 10 on the Billboard Hot 100 chart (four at #1). In addition, she is the recipient of three GRAMMY® Awards (20 nominations), one Daytime Emmy Award, three Billboard Music Awards, seven MTV Video Music Awards, two MTV Europe Awards, two People’s Choice Awards, was named Billboard’s Woman of the Year in 2013, and has sold out arenas all over the world.  Her seventh studio album, Beautiful Trauma, is certified platinum, and it debuted at #1 on Billboard’s 200 chart and marked a career high for first week sales. Her eighth studio album, Hurts 2B Human, is set for release on April 26th via RCA Records and is available for pre-order today.

Imagine Dragons will bring the crowd to their feet on Friday night of the Grand Prix weekend when they bring their limitless passion and genre-bending music to Austin, Texas. Over the last half-decade, Imagine Dragons has emerged as one of the biggest and most compelling rock bands in the world. Within a year of its June 2017 release, their third studio album, EVOLVE, went double-platinum, yielding three back-to-back #1 singles: "Believer," "Thunder," and "Whatever It Takes."  Throughout their Evolve World Tour—a 116-date trek that sold over 1.7 million tickets worldwide—the multi-platinum, GRAMMY® Award-winning band began working on their follow-up and ended up creating their most dynamic work to date. The Las Vegas-based group released their latest album, Origins, in November 2018 and have seen great chart-topping success with the powerhouse single “Natural” and epic balladry of “Bad Liar.”

Past artists who have performed on the Super Stage during the USGP weekend include Taylor Swift, Justin Timberlake, Bruno Mars, Britney Spears, Usher & the Roots, Stevie Wonder and Sir Elton John.

COTA will once again offer the rain plan guarantee. Should it rain over 1.5 inches within the 24 hr period leading up to the race, all three-day RESERVED seats purchased before August 31 will receive a 105% refund of their ticket. Hotel rooms can be booked now at circuitoftheamericas.com/bookaroom. Three-day race tickets, which include access to both headlining concerts along with other featured entertainment, start at $175 and will go on sale Tuesday, April 23 at 10 a.m. through www.thecircuit.com. Sunday-only bleachers and Sunday-only Premium Grandstand tickets will also be available for purchase, along with premium on-track viewing upgrades for both concerts. For tickets and more information, please visit circuitoftheamericas.com/f1.